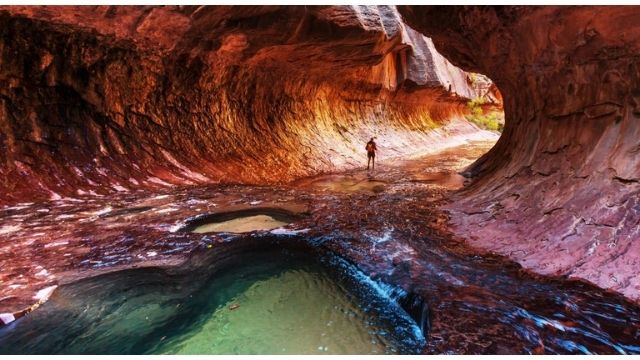 Zion National Park, in southwest Utah, is known for its breathtakingly steep red cliffs and some of the most beautiful canyon scenery in the country.

Here are ten amazing facts about Zion National Park, ranging from the astonishing number of animals and plant species to the archaeological finds revealed within its borders.

1. Zion National Park is 232 square miles in size. Hiking in the 20-30-foot-wide region known as the Narrows or the narrower slot canyon known as the Subway on the canyon bottom offers some exhilarating options.

The steep cliffs of Zion Canyon also contribute to the creation of waterfalls and colorful hanging gardens, while the park’s 5,000-foot elevation shift from Horse Ranch Mountain to Coal Pits Wash provides a diversified terrain with a diverse range of habitats and ecosystems.

2. It is home to 78 different mammal species. The landscapes of Zion provide habitat for a diverse diversity of wildlife, including 78 mammal species, 30 reptile species, seven amphibian species, eight fish species, and 291 bird species.

The park is also home to a large number of endangered species, such as the California condor and the vulnerable Mexican spotted owl. Even Mojave desert tortoises, a rare, federally endangered species that spends virtually all of its time underground burrows, have a small population in Zion.

3. There are 2,000-foot sandstone cliffs in the park. The Navajo sandstone, which is made up of stratified minerals created by windblown sand dunes, was deposited in the area between 110 and 270 million years ago and is what you’ll see today in Zion.

The sandstone cliffs average roughly 2,000 feet in depth, which contributes to the park’s reputation as a world-class climber’s paradise. Hikers go to the national park every year from March to May, and then again from September to November, to engage in huge wall climbs.

On the upper plateaus, you’ll find mixed conifer and aspen woods, cacti, and desert shrubs in the parched grasslands at lower elevations, and a plethora of aquatic species in the Virgin River’s riparian area.

5. The springs and hanging gardens of mosses, ferns, and wildflowers that are supplied by the water that seeps out of the Navajo sandstone are also well-known in Zion.

The secluded arch is just over 287 feet long, and the trail to reach there has become a favorite challenge for park visitors looking for a little excitement.

Kolob is the country’s second-largest arch (after Landscape Arch in Arches National Park) and the fourth-largest on the planet.

7. Zion National Park is located within a volcanic field that is still active. The park’s oldest volcano, estimated to be 1.1 million years old, is located in the Kolob Volcano field, while four others along the Kolob Terrace Road erupted between 220,000 and 310,000 years ago.

Although the sort of volcano field on which Zion sits erupts once per 10,000 years on average, a shorter interval between eruptions is always possible. The most recent eruption in Zion is thought to have occurred 32,000 years ago.

8. Utah’s First National Park Was Zion. On November 19, 1919, President Woodrow Wilson established Zion National Park. It was a national monument before that, albeit it didn’t go by the name Zion. President Willian Howard Taft designated the area as the Mukuntuweap National Monument in 1909.

The decision to change the park’s name from the native Southern Paiute “Mukuntuweap” to “Zion,” according to the National Parks Conservation Association, was made in an attempt to attract more tourists to the area. When Horace Albright, the Park Service’s acting director at the time, first visited in 1917, he thought the name was too difficult to say and spell. 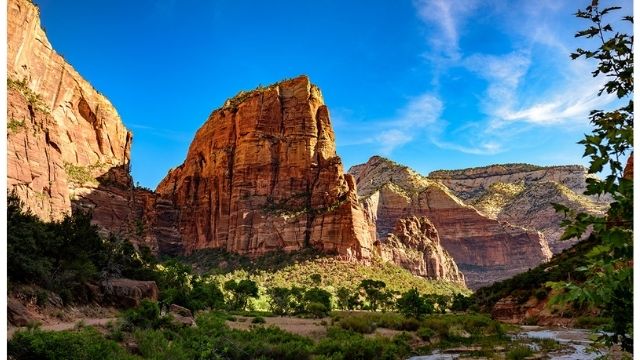 9. Zion also aids in the preservation of important archaeological sites. Petroglyphs and pictographs, as well as other evidence of early humans dating back to at least 6,000 B.C., can be found within the park’s limits.

Most of these locations are either restricted to the public or not marketed to prevent destruction, although the Zion Canyon Visitors Center can grant special permission to see certain of them.

10. It has one of the country’s most dramatic hikes. Angels Landing Trail is a 5-mile round-trip trek in Zion National Park with a severe 1,500-foot elevation rise. The trail’s final 0.7 miles are about 5 feet wide and feature a series of 21 extremely steep switchbacks with drops on both sides.

Angels Landing Trail has claimed the lives of 13 individuals since the year 2000, despite the fact that the park maintains chains, guard rails, and carved steps in some of the more dangerous sections of the hike.