Wiz Khalifa is a well-known rapper, singer, and songwriter from the United States. Since his debut in 2006, he has been engaged in the music industry. He is well recognized for his hip-hop music and infrequent acting roles. ‘Warner Bros. Records,’ ‘Atlantic Records,’ ‘Taylor Gang,’ and ‘Rostrum Records‘ have all been linked with him.

His single ‘Black and Yellow,’ which was his first song for ‘Atlantic Records,’ garnered him a lot of attention. ‘See You Again,’ his most renowned song, was featured in the film ‘Furious 7.’ The song reached the top of Billboard’s “Hot 100” chart and remained there for 12 weeks.

He has seven studio albums to his credit. He’s also released a soundtrack CD and an extended play. He has also appeared in a few films and made guest appearances on a number of television shows. He has received numerous awards, including the ‘BET,’ ‘Billboard Music Awards,’ and the ‘Teen Choice Awards.’

His mother took him to get his first tattoo when he was 16, but he had an artistic vision for his skin long before then. “I knew I wanted to be covered even before I got my first tattoo — since I was a kid.” He told Interview, “I just sketched out what I felt and put it on my body to communicate my tale.”

“I still leave minor spaces and areas where I can add things.” I want to acquire tattoos for the rest of my life. I’d rather not run out of room while I’m still young. I just want my tattoos to symbolize something.”

He has no regrets about his Eurodance hit

‘Say Yeah,’ Khalifa’s only Warner Bros. single, sampled the familiar synth line from Alice Deejay’s song ‘Better Off Alone.’ Khalifa has no regrets regarding the song, despite the fact that it is a far cry from his current, laid-back style. He said, “I love that song.”

“We had a wonderful idea, and we executed it properly, and people liked it, so for people to attach it to me, that’s cool, I like that.” I take satisfaction in the fact that I don’t play games with myself. I don’t look back on anything I do and think to myself, ‘I shouldn’t have done that…’ It’s all part of the learning process, and I’m just trying to keep moving forward.”

He was born in the state of North Dakota

Wiz is best known as Pittsburgh’s biggest hip-hop export, although he was originally born in North Dakota to a military father. Before arriving in Steel City, he traveled to Germany, England, and Japan. He claims that his international adventures broadened his horizons and made him more outgoing because he had to meet new acquaintances with every relocation.

If you like Wiz Khalifa, you’re a member of the Taylor Gang

“Taylor Gang or die” is Wiz’s crew’s motto, which was named after either Khalifa’s Taylor Allderdice High School or the Chuck Taylor sneakers he wears, depending on which tale you believe. “The Taylor Gang is a movement, a way of life,” he explained. “It’s not just me and my staff who support me; it’s also the fans.” “We’re all Taylor Gang reps.”

Most musicians would love for a record deal, but Khalifa was content to walk away from his after ‘Say Yeah’ when he couldn’t agree with Warner Bros. He never released a full album with the label and spent another year solo, declining a chance to join Rick Ross’ Maybach Music Group, before signing with Atlantic in the summer of 2010.

In March 2011, he released his major-label debut, ‘Rolling Papers,’ which debuted at No. 2 behind Britney Spears’ ‘Femme Fatale.’

Girlfriend Amber Rose has had the opportunity to meet his mother

In January, he debuted them during a Pittsburgh Steelers game. “They truly, really like each other,” Wiz explained. “Amber is a darling, and everyone who meets her, even my mother, loves her.” As a result, it was really tight.” That’s great news since if Amber is going to have his kids at some time, we’re delighted the future grandmother approves!

His parents were supportive of his marijuana use

Wiz began smoking at an early age and recalls his first experience. “I got a lot of stoned.” I was awake despite the fact that I thought I was sleeping. He admitted, “I was a little younger than I should’ve been.” “It didn’t sit well with my father.” My mother was unconcerned. They realized it wasn’t having any effect after a while. “I was still working.” “My mother smoked pot, so she simply wanted in,” he added, laughing.

Wiz is a nerd, at least in the movies

Wiz and Snoop Dogg appear to be a natural fit for a stoner flick, so it’s no surprise that they’re filming ‘High School.’ According to Khalifa, who spoke to Billboard. “It’s a fantastic buddy movie.” It’s just that Snoop is the popular kid at school, and I’m the nerd. 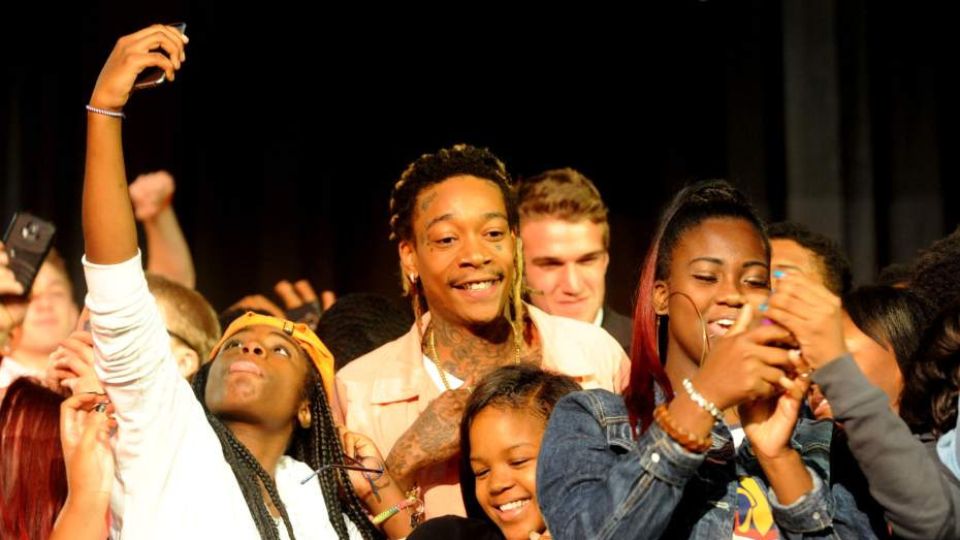 ” It’s difficult to envision a cool guy like the geek, but we’ll have to wait and see. “We’ve got ten songs now and we’re using all ten of them,” he said, adding that he and Snoop intend to produce a soundtrack. We’re simply doing things that people don’t do anymore.”

Last October, Drake made a personal plea to Wiz Khalifa to join him on tour, but Wiz graciously declined because his album ‘Rolling Papers’ had not yet been published. Even if the crowds were significantly smaller, he wanted to perform for his own supporters.

Read more: The Milky Way Is Made Up of Ten Different Galaxies.

“No disrespect to cuz or anyone else who might want to see me do some more collaborative things,” Wiz told XXL, “but I gotta keep focusin’ on what it is to keep buildin’ and keep my brand as strong as it is.” “Maybe when I make $10 million, then we can tour,” Wiz said, referring to Drake’s previous year’s earnings of $10 million.

Wiz Khalifa wrote “Black and Yellow” with the purpose of it being the Pittsburgh Steelers’ anthem.

It wasn’t by chance that Steeler supporters embraced ‘Black and Yellow’ as the team proceeded to the Super Bowl in February; Wiz designed it that way. When the song was released, he told MTV that he hoped it would become a club anthem. He sang the song before the AFC Championship Game a few months later, and the song went to No. 1 during Super Bowl week.