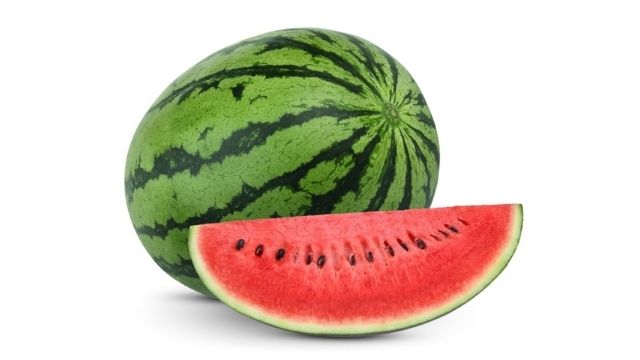 Watermelon, one of the most famous fruits of the summer, is low in calories and high in water. It’s also high in vitamins A and C, as well as lycopene, and is less acidic than citrus fruits and tomatoes, which are other well-known sources of lycopene and vitamin C.

46 calories, 0.9 grams of protein, 11.5 grams of carbs, and 0.2 grams of fat are found in one cup of diced watermelon (152 grams). Watermelon is high in lycopene, as well as vitamins A and C. The USDA has provided the following nutritional information.

Watermelon’s carbs are primarily sugars, with only a small amount of fiber. Fructose makes up half of the sugar, glucose makes up a quarter, and sucrose makes up less than a quarter, with other sugars making up tiny fractions. 1 It’s crucial to measure watermelon carefully if you’re calculating carbohydrates.

The glycemic index (GI) of watermelon is 76.2. This indicates it may cause your blood sugar to rise faster than foods with a lower GI. However, a half cup of sliced watermelon has a glycemic load of 4, which is considered modest when considering how much you consume each serving.

Watermelon can be considered a fat-free food for dietary purposes. Omega-3 fatty acids are found in the seeds (which are edible). 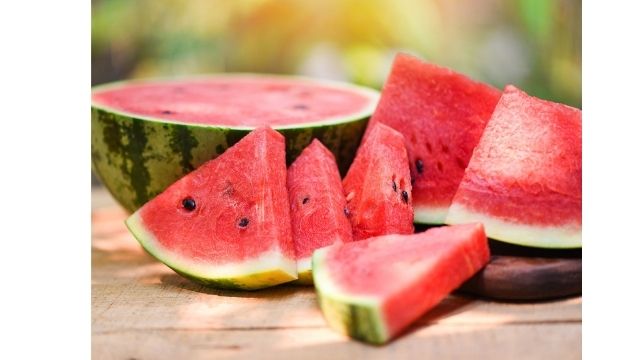 Watermelon has a low protein content, with only about 1 gram per cup. Some companies, interestingly, make watermelon seed protein by sprouting and shelling the seeds.

Fresh seeds, on the other hand, will not provide that level of protein because the seed’s shell inhibits the protein inside from being digested.

The nutrients in a fully ripe red watermelon are higher than in a less ripe watermelon.

Watermelon is a strong source of vitamin C and vitamin A, with a single serving providing a considerable portion of your daily requirement for each.

Vitamin C promotes wound healing and may have anti-aging and immune-boosting properties6, whilst vitamin A is crucial for eye health.

A one-cup portion of watermelon also contains about 7% of your daily copper and pantothenic acid requirements, 5% of biotin, and 4% of vitamins B1 and B6.

Watermelon, sliced or balled, has about 46 calories per cup. If you like to eat it wedged, a wedge around one-sixteenth of the melon (286 grams) contains nearly double the number of calories or about 86 calories.

Watermelon has a low-calorie count and nearly negligible fat content. While it has many beneficial elements, such as vitamins A and C, it is also heavy in sugar, so those who are watching their sugar intake should eat this fruit in moderation.

Watermelon, in addition to being a delicious summer treat, has a number of health benefits.

Watermelon, as its name implies, contains almost 92 percent water8, making it a particularly hydrating food. Try a couple of servings of watermelon if you or your children have trouble drinking enough water, especially on hot summer days. Along with your hydration, you’ll gain more micronutrients.

Watermelon has antioxidant properties because it is abundant in lycopene, a carotenoid phytonutrient that has been demonstrated in studies to help lower or prevent high blood pressure.

Tomatoes are well-known for their high levels of lycopene, but a fully ripe watermelon has even more.

Infection and Cancer Risks are Reduced.

Flavonoids, carotenoids, and triterpenoids are some of the other antioxidants found in watermelon. Antioxidants like antioxidants aid in cell repair and may reduce your risk of infection and cancer in some cases.

Assists in the Loss of Weight

Watermelon was found to be more filling than low-fat cookies in a small trial of overweight persons. They also saw improvements in body weight, BMI, waist-to-hip ratio, and blood pressure.

Body Mass Index (BMI) is an out-of-date, skewed metric that ignores a variety of characteristics, including body composition, ethnicity, race, gender, and age.

Despite its flaws, BMI is still commonly utilized in the medical field since it is a low-cost and quick way to assess possible health status and outcomes.

Aids in the Reduction of Muscle Fatigue

Watermelon contains a high level of the amino acid citrulline. Concentrated citrulline capsules are sold as a nutritional supplement for athletic performance. Although some research demonstrates that citrulline supplements may lessen weariness after exercise, the effects of citrulline are not conclusive.

Food allergies to watermelon are uncommon.

If you have hay fever or are allergic to ragweed pollen or grasses, you could have a food-pollen allergy syndrome, which could cause a cross-reaction to pollen-like proteins in watermelon.

After eating watermelon, you may have a tingling or itching sensation in your mouth. This can be more harmful in rare circumstances, causing throat swelling or anaphylaxis.

Watermelon is relatively risk-free, according to the study, as it is “nontoxic with no documented negative effects.”

15 However, because watermelon contains sugar, diabetics should be cautious when eating it to avoid blood sugar rises. 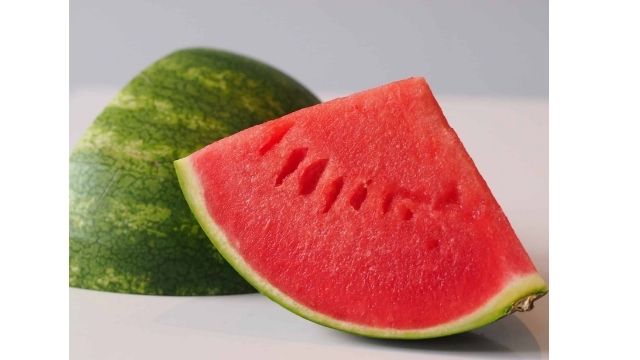 Watermelon comes in a wide range of cultivars and variations. These can be classified based on their size (“icebox” or smaller variations vs. bigger “picnic” varieties), the color of their flesh (pink, yellow, or orange), and whether or not they contain seeds.

The rind of a watermelon can be plain green, green-striped, or white-mottled. Melons come in a variety of shapes and sizes, weighing anything from 6 to 29 pounds. 16 Although golden-fleshed types are becoming more popular, the crisp flesh is generally pinkish-red.

Watermelons, which are native to tropical Africa, are commercially cultivated in the United States in places like Texas, Florida, Georgia, and California, where the temperature is warm and suitable to a long growing season.

When It’s the Most Effective

Watermelon is in season in the United States during the summer. The weight of a ripe watermelon is proportionate to its size. The exterior should be smooth and devoid of nicks and dents. Instead of being white, the ground region where the melon was sitting should be a creamy yellow tint.

Watermelon that has not been chopped can be stored at room temperature. Because heat causes the flesh to dry out, keep watermelon in a cool spot like a cellar or the refrigerator if it’s hot outside.

Watermelon can be used in smoothies, salsas, and salads in addition to traditional slices (both fruit salads and veggie-heavy ones, too). It goes nicely with cheese, almonds, and other protein sources because of its slight sweetness.

Watermelon can also be grilled or frozen for a wonderful dessert. To make a delightful, low-calorie beverage, mix chilled or frozen watermelon pieces with water or seltzer.

The entire watermelon can be eaten. Both the seeds and the rind are edible, with the latter being made into watermelon rind flour or served after being stir-fried, stewed, or pickled. (In a seedless watermelon, the white seeds are actually empty seed coats that haven’t fully matured.)