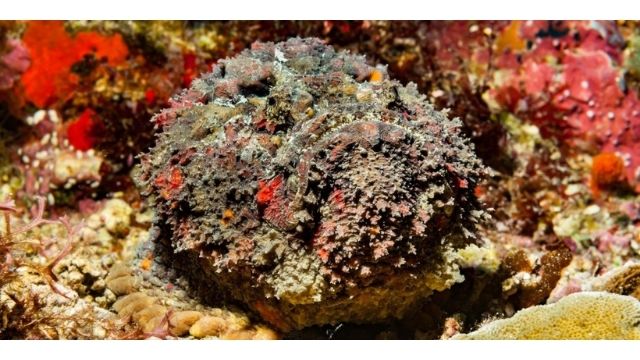 stonefish, (Synanceia), any of certain species of venomous marine fish of the genus Synanceia and the family Synanceiidae, found in shallow waters of the tropical Indo-Pacific. Stonefish are sluggish bottom-dwelling fish that live among rocks or coral and in mudflats and estuaries. Thickset fish with large heads and mouths, small eyes, and bumpy skins covered with wartlike lumps and, sometimes, fleshy flaps, they rest on the bottom, unmoving, blending almost exactly with their surroundings in form and color. They are dangerous to fish. Difficult to see, they can, when stepped on, inject quantities of venom through grooves in their dorsal fin spines. Wounds produced by these fish are intensely painful and sometimes fatal. A representative species is S. verrucosa, which may grow about 33 cm (13 inches) long.

The family Synanceiidae includes a few other species of robust warty fish. They are also venomous, though not as notorious as the stonefish.

Certain scorpionfish of the family Scorpaenidae (order Scorpaeniformes) are also referred to as rockfish or stonefish.

Profile of a Stonefish

Synanceiidae is a fish family that includes stonefish. They are known as the world’s most venomous fish, with a sting that produces agonizing pain in humans.

Their name originates from their ability to mix in with rocky seafloors and coral, which makes them particularly deadly because they are easily walked on.

Stonefish from the estuary (Synanceia horrida)

They come from the Indo-coastal Pacific regions, such as Northern Australia, India, the Philippines, and others.

Their skin blends very well with stony or coral ocean floors, making them excellent concealment. They can wait for their prey (small fish and crustaceans) to pass before striking at rapid speed and devouring them whole.

Sea snakes, stingrays, eels, and sharks are all attracted to the stonefish because they may eat it without being harmed by its venom. 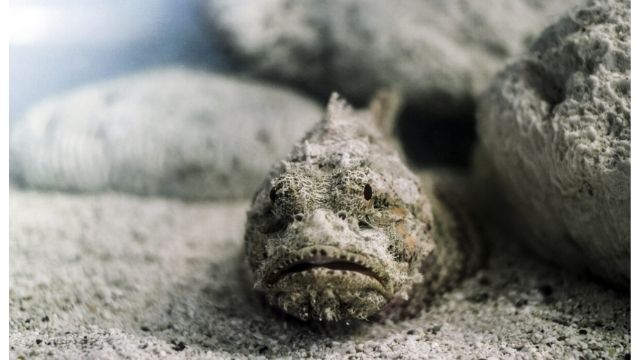 1. They are the world’s most venomous fish. Both other marine animals and humans are killed by the venom. It causes excruciating pain, difficulty breathing, heart damage, fits, and paralysis. There is an anti-venom, but it can be lethal if it is not administered soon.

2. The poison is produced by their spines. They have 13 spines running down their backs that release the venom. A venom sac is located at the base of each spine and is activated when pressure is applied to it, such as when someone steps on it.

4. They’ve mastered the art of disguise. They are excellent at imitating the appearance of a stone, with skin covered with spots of brown, yellow, orange, or red, as well as a bumpy surface.

5. They strike quickly at their victim. They will sit still while watching for prey, then attack and consume the prey in a matter of 0.015 seconds.

6. There are a lot of stings, but just a few people die as a result of them. Stonefish stings have caused no deaths in Australia and only a few in other nations. There are, however, some stings each year that necessitate rapid medical attention.

7. They are linked to lionfish in seven ways. Stonefish are members of the Scorpaeniformes order, which also includes lionfish. Another highly venomous fish native to the Indo-Pacific is this one.

8. Sea snakes are after them. Sea snakes are assumed to be immune to the poison, although no one knows for sure. Stonefish are bitten by sea snakes, which inject poison into them. When the stonefish no longer struggles, they devour them whole, head first, to avoid getting their tongues hooked on the spines.

9. They can survive for 24 hours without water. They have the ability to absorb oxygen through their skin, allowing them to survive when the tide goes out.

10. They’re a delicacy, to be sure. They are popular in Japan, Guangdong, China, and Hong Kong, among other Asian countries. The venom loses its lethal properties when cooked. It can also be eaten raw if the spines have been removed.

11. They appear in a traditional aboriginal dance. The dance, which depicts a man imitating the pain of being stung by a stonefish, is intended to educate children about the hazards of stonefish stings.