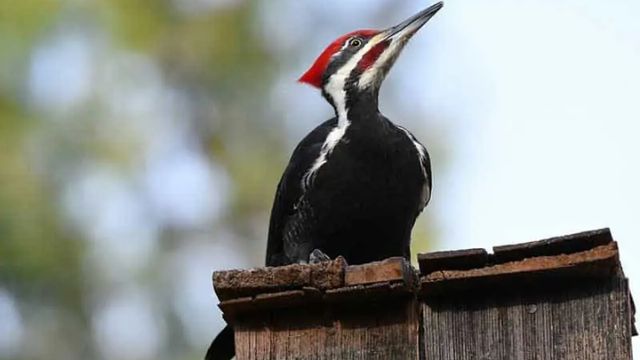 To differentiate itself from the other flickers, the northern flicker has a little bit more brown on its body. Woodpeckers are fascinating animals that have a wide range of very specific skills.

The pileated woodpecker is not frequently seen in the northwest part of Iowa, but observations of the bird have been reported there. It can reach a maximum length of 19 inches, making it the longest woodpecker found in Iowa.

The smallest woodpecker is the downy woodpecker, which is barely 6 inches in length while having a nearly identical appearance to the much bigger hairy woodpecker.

Although there are a significant number of species of woodpeckers that have healthy populations, none of them are immune to the dangers posed by humans, which can vary from the destruction of their habitat to the use of dangerous pesticides.

To reach insects inside the holes they scratch out, woodpeckers have tongues that are about twice the length of their bills. The lengthy tongue coils around the back of the head between the skull and the skin. The tongues of woodpeckers play a surprising and ingenious role in the high-impact pecking that these birds are capable of. 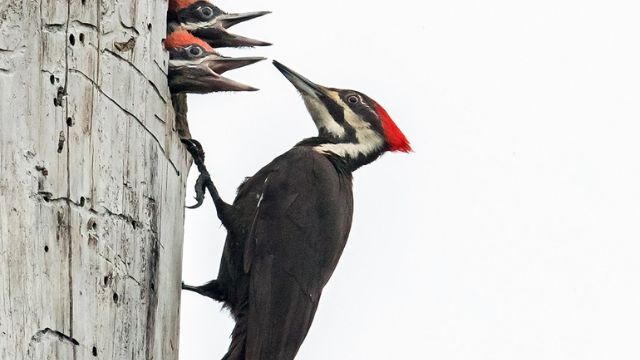 Their tongues are sticky as well. Most woodpeckers have barbed tongues or sticky saliva on their tongues to assist them to take out insects from their holes.

Woodpeckers have long, specialized tongues that, in concert with their sharp, chisel-like beaks, allow them to obtain food that other birds are unable to. However, that is not the only factor that sets these organs apart from others in their category.

They Aren’t Bothered By Headaches.

When they peck, woodpeckers’ bills help spread the shock through their thick skulls. People would be in a lot of pain if they hit their heads on a tree, but woodpeckers have no problems!

The skull bones of a woodpecker hold the animal’s brain in a comfortable position and protect it from concussions. The hyoid bones of woodpeckers provide the function of seatbelts for their brains.

Iowa woodpeckers build their nests in tree cavities that they dig out themselves. Woodpeckers are important to the ecosystem because they help keep insect pests in check. Other birds and mammals also use the nest holes they make, even though they don’t drill. 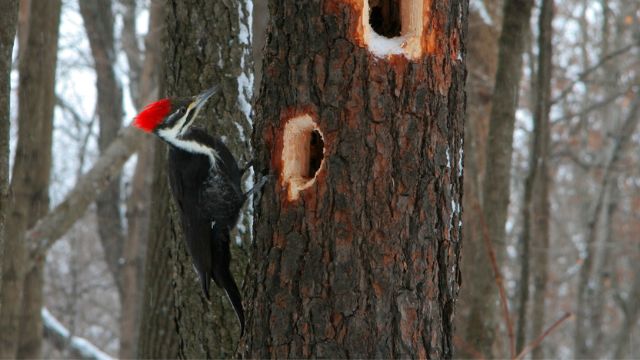 The theatrics that they engage in provide pleasure for a great number of birdwatchers. It is believed that woodpeckers are responsible for the removal of up to 85 percent of the larvae of the Emerald Ash Borer (EAB) from infected ash trees.

Woodpeckers are the only animals in the world that make a sound with something other than their bodies. They will drum on various items to express territory, attract mates, find food, and sometimes even exercise or play. This red-headed woodpecker’s song is worth listening to.

Songbirds use singing to achieve the same territorial and courting goals that woodpeckers do with drumming, which consists of a short, loud sequence of knocks carried over long distances. In the early morning hours of spring, woodpeckers can be heard most clearly on resonant surfaces.

Woodpeckers enjoy eating berries and nuts in addition to insects. That is why they will appear on your nut feeders. Some woodpeckers are so fond of acorns that they will store them for the winter, and red-headed woodpeckers may even cover their cache with damp splinters that dry out to form a tight seal.

Red-headed woodpeckers have even been observed attempting to fill a house’s attic with acorns. Acorn Woodpeckers create unique holes in trees with their sharp, powerful beaks that are just the right size to contain an unusual food—acorns.

The typical lifespan of a wild woodpecker is anywhere from four to eleven years, but it all depends on the species. The average length of life for status in the wild is 119 months.

It is predicted that the red-headed creatures have a maximum lifespan of 12 years, despite the fact that the oldest red-headed woodpecker on record lived for at least 9 years and 11 months.

Rare And Unusual Types Of Species

Nesting cavities for woodpeckers are drilled throughout the year in trees.. It’s not uncommon for various species of birds and mammals, including starlings, chickadees, owls, and squirrels, to make their homes in old holes.

The Ivory-billed Woodpecker has not been seen in North America since the late 1940s and early 1950s, and it is considered extinct.

Since October 1970, the red-cockaded bird has been listed as an endangered species under a statute that predates the Endangered Species Act of 1973. Habitat degradation is the most serious hazard to these birds. Both the number of older pine trees and the extent of the woods have decreased.

A government law that has been in effect since 1918 protects almost all birds native to the United States, including their nests and eggs.

The Migratory Bird Treaty Act protects over a thousand bird species, including woodpeckers.

What Is The Speed Of A Woodpecker?

How Do Woodpeckers Keep Their Minds Safe?

Does the tongue of a woodpecker protect its brain? Yes. A woodpecker’s tongue wrapped around the back of its brain not only provides storage for a long appendage but also protects the bird’s brain from harm during high-speed striking.

Woodpeckers Peck At What Time Of Day?

Furthermore, woodpeckers may begin to peck, drill, or drum as they encounter the first rays of sunshine in the morning. Woodpeckers can be active at any time of day when there is light, although they are more likely to be asleep when there is no light.

Do Woodpeckers Sleep With Their Eyes Closed?

Woodpeckers’ eyes have a unique membrane that closes when their beak strikes the wood.