Although Seattle is recognized for its beauty, there are many fun facts about the city that you may not be aware of. Many people recognize Seattle as the birthplace of some of the world’s most well-known corporations, like Starbucks, Amazon, and Microsoft, to mention a few. However, the city of Seattle is made up of much more trivia.

I’ve lived in Seattle for nearly 30 years and am still discovering new things about the city. You’ll enjoy learning more about what I consider my favorite city, from Seattle history to Seattle music.

Whether you’re a native Seattleite who thinks you know everything there is to know about the city or a first-time visitor, here are 38 things you may not know about Seattle.

I find Seattle’s historical facts intriguing, and I enjoy sharing them with people who are unfamiliar with the city. Here are 10 of my favorite Seattle fun facts, ranging from the area’s role in the gold rush to how the city was founded.

1. The well-known Pike Place Market began as a result of pricey onions. Produce prices were skyrocketing in 1906, so the city proposed a public market where farmers could sell their produce directly for a lesser price.

3. In 1896, gold was discovered in the Canadian Klondike region, kicking off Seattle’s largest boom period, known as the Klondike Gold Rush. The city was the principal starting point for people heading north.

4. Seattle was named after Chief Seattle, also known as Chief Si’ahl, a notable Native American chieftain. He was a key figure in the area’s efforts to accommodate European settlers.

5. The Denny Party founded the city in 1851 on what is now Alki Point in West Seattle. You may see the exact site by visiting a statue there. 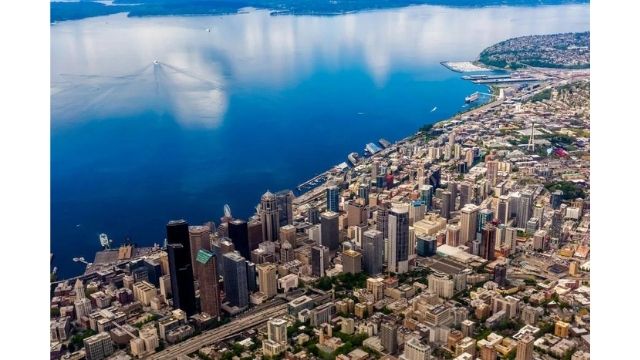 6. While Seattle is now known as the “Emerald City,” the term “Queen City” was once used.

7. In 1907, at Holgate Street and Western Avenue, Seattle opened one of the world’s first gas stations.

10. While it may not appear to be the ideal place to be during a natural disaster, the Space Needle has a 30-foot-deep foundation that allows it to endure a 9.1-magnitude earthquake and winds of up to 200 miles per hour.

11. While many people travel to Pike Place Market to view the “first Starbucks,” the first actual Starbucks was located at 2000 Western Avenue.

12. Glaciers moving south receded and left massive piles of rock debris, forming the modern geology of Seattle. These mounds are today popular districts such as Queen Anne Hill, Cherry Hill, First Hill, Capitol Hill, and Beacon Hill (if you’re visiting Seattle, check out some of the greatest places to stay!).

13. Harbor Island is the country’s largest man-made island. No one lives here, and it’s mostly used for industrial and commercial purposes.

15. Rather than reconstructing the city from the ground up, the new city was determined to be erected on top of the old. As a result, several portions of modern-day Seattle are 22 feet higher than the ancient metropolis.

16. You can take an Underground Tour to walk through late-nineteenth-century businesses and sidewalks. You’re probably walking right over the tour if you see enormous purple gems on the sidewalk in the Pioneer Square neighborhood. These are utilized as skylights to bring light into the tunnels (and this is a great activity to do if you only have one day in Seattle).

17. The Olympic Mountains to the west and the Cascade Mountains to the east are the two mountain ranges that surround Seattle. Both are visible from the city on clear days. (Check out this Olympic Peninsula road trip plan for a fun holiday!)

20. Many people are familiar with grunge bands like Nirvana and Soundgarden, but Sir Mix-A-Lot, Kenny G, Kenny Loggins, and Heart all got their start here.

21. Our city has the country’s second-highest rate of live music performances per capita (second to New York City).

22. The city is known for the “Seattle scene,” but it is also home to a number of notable sub-genres.

23. While many people think of Seattle as the birthplace of the music industry, the majority of the greats originated from Tacoma, Bellingham, Olympia, and even Portland (all great Seattle weekend getaways). Nirvana, for example, was from Aberdeen and primarily performed in Olympia, not Seattle.

24. Although Pearl Jam became a worldwide sensation, they were initially despised by residents of Seattle, who saw them as “corporate puppets” (even Nirvana’s own Kurt Cobain was an outspoken critic for many years).

25. The Gum Wall, located in Post Alley behind Pike Place Market, receives hundreds of pieces of gum each year from tourists. People waiting for tickets to Unexpected Productions’ events used to stick their gum and coins on the wall to pass the time.

26. Every year, the Washington State Ferry System transports almost 25 million passengers. This is the country’s most extensive system and the world’s third-largest.

29. Rachel is the name of the 550-pound bronze pig that stands in front of Pike Place Market.

30. Despite the rain, Seattle residents buy more sunglasses than any other city in the world. One reason for this could be how active many inhabitants are regardless of the weather (hiking, kayaking, bicycling, and so on). There’s always a day trip to Seattle to take!

31. When it comes to rain, Seattle receives less than Houston, New York, Atlanta, and Boston each year. We have more cloudy and slightly drizzly days than others, but it isn’t the rainiest city in the country, contrary to common belief. Our annual rainfall total is only approximately 38 inches.

32. Seattle boasts the largest houseboat population in the country, with over 500 houseboats on Lake Union and other bodies of water in Puget Sound (you can see them by hiring a hot tub boat on the lake!)

33. The 42-story Smith Tower was the highest skyscraper west of the Mississippi when it was completed in 1914.

34. The top of the Smith Tower is actually a residential penthouse where numerous people, including a family with small children, have lived over the years.

35. At 7,710-feet long, the 520 Floating Bridge connecting Seattle and Bellevue is the world’s longest floating bridge.

38. Pier 52 in Seattle is the busiest ferry station in the country.