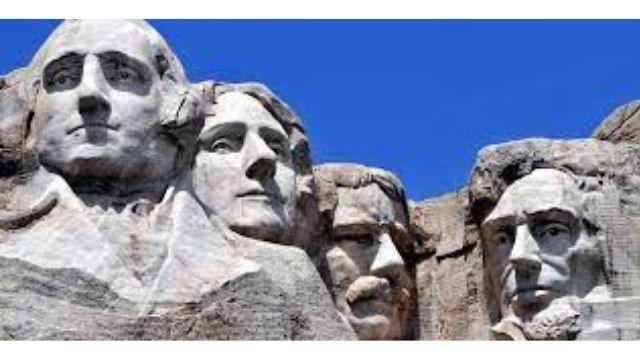 Each year, around 3 million people visit Mount Rushmore, which is located in the Black Hills near Keystone, South Dakota. George Washington, Thomas Jefferson, Theodore Roosevelt, and Abraham Lincoln are among the four presidents chiseled into the granite rock face over many decades. However, the monument’s initial ideas were quite different.

Gutzon Borglum, the mountain’s creator, and sculptor had far greater intentions for it, but financing constraints, the pace of construction, and even Borglum’s combative nature led to a substantial scale back of his initial ambitions.

There’s even a half-completed “Hall of Records” cut into the mountain 800 feet above the earth, with no way to access the secret area. Continue reading to learn more about those early ambitious ambitions and what happened to them.

Borglum wanted Mount Rushmore to be a “Shrine of Democracy,” and he envisioned carving four faces into the rock. Three presidents of the United States appeared logical choices: George Washington, who was the country’s first president, Thomas Jefferson, who wrote the Declaration of Independence and negotiated the Louisiana Purchase, and Abraham Lincoln, who kept the country together during the Civil War.

There was, however, great discussion about who the fourth face should honor. Teddy Roosevelt was favored by Borglum for his conservation efforts and the construction of the Panama Canal, while Woodrow Wilson was favored by others for his leadership of the United States during World War I.

In the end, Borglum went with Roosevelt.

Susan B. Anthony, a women’s rights pioneer, was the subject of a grassroots effort in 1937 to add her face to Mount Rushmore. Anthony’s request was even conveyed to Congress in the form of a bill. With money tight during the Great Depression and WWII looming, Congress decided to keep only the four heads that were already in place.

2. After Whom is Mount Rushmore Named? 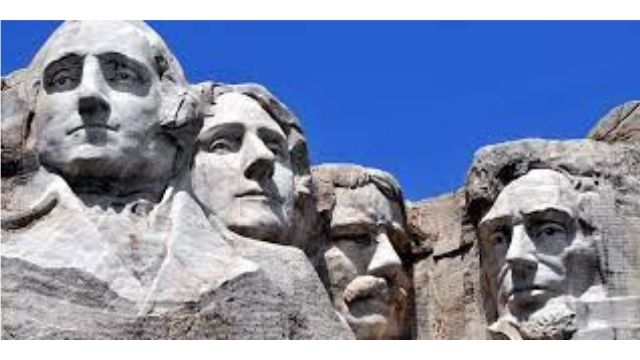 Many people are unaware that Mount Rushmore was given its name before the four massive faces were carved into it. Mount Rushmore, it turns out, was named after Charles E. Rushmore, a New York attorney who visited the area in 1885.

Rushmore was on a business trip to South Dakota when he noticed the massive granite mountain. When Rushmore inquired about the peak’s name, his guide said, “Hell, it never had a name, but from now on we’ll call the dang thing Rushmore.”

3. Dynamite is Responsible For 90% of the Carving.

Mount Rushmore’s carving of four presidential faces was a massive undertaking. Chisels were clearly not going to be adequate to remove 450,000 tonnes of granite. Borglum had his employees try jackhammers when carving began on Mount Rushmore on October 4, 1927. Jackhammers, like chisels, were too sluggish.

On October 25, 1927, after three weeks of arduous labor and no success, Borglum decided to use explosives. Workers learned how to blast away the granite with practice and precision, getting within inches of the sculptures’ “skin.”

Drillers would make deep holes into the granite to prepare for each blast. Then, going from the bottom to the top, a “powder monkey,” an explosives expert, would place sticks of dynamite and sand into each of the holes. The charges would be detonated during the lunch break and in the evening when all of the workers were safely off the mountain.

Originally, Borglum intended to carve more than simply presidential figures into Mount Rushmore; he also intended to insert text. The phrases were to be carved into the rock face in what Borglum referred to as the Entablature, and would contain a very brief history of the United States.

President Calvin Coolidge agreed to write the words after Borglum requested it. Borglum, on the other hand, despised Coolidge’s first post so much that he entirely rewrote the phrasing before sending it to the press. Coolidge was enraged and refused to continue writing.

The projected Entablature’s location changed several times, but the intention was that it would be placed adjacent to the carved pictures. The Entablature was eventually discarded, partially due to a lack of funding and partly due to the words not being legible from a distance.

5. No One Was Killed

Men dangled precariously off the top of Mount Rushmore for 14 years, seated on a bosun’s chair and attached only by a 3/8-inch steel wire to the summit. The majority of these individuals were armed with power drills or jackhammers, and some even had dynamite.

It seemed like the ideal setup for a mishap. Despite the potentially hazardous labor conditions, no one was killed while carving Mount Rushmore. Unfortunately, several of the employees breathed silica dust while working on Mount Rushmore, causing them to develop silicosis and die later. ​

When Borglum’s plans for an Entablature were shelved, he devised a new plan for a Hall of Records. The Hall of Records, carved into Mount Rushmore, was intended to be a vast room (80 by 100 feet) that would serve as a depository for American history.

Borglum planned to carve an 800-foot-high granite grand stairway from his workshop near the base of the mountain all the way up to the entrance, which was positioned in a little canyon behind Lincoln’s head, for guests to reach the Hall of Records.

The interior was supposed to be ornately designed with mosaic walls and busts of renowned Americans. Major documents would be placed in bronze and glass cases, and aluminum scrolls describing important events in American history would be publicly displayed.

Workers began blasting granite in July 1938 to construct the Hall of Records. Work on Mount Rushmore had to be suspended in July 1939, much to Borglum’s chagrin, when financing became so scarce that Congress, concerned that the monument would never be completed, directed that all work be focused solely on the four faces.

What’s left is a 68-foot-long, 12-foot-wide, and 20-foot-high tunnel that’s been crudely hewn. The Hall of Records is still inaccessible to tourists because no steps were carved.

The Hall of Records sat idle for nearly 60 years. A modest repository was installed inside the Hall of Records on August 9, 1998. The repository, which is housed in a teak box that sits in a titanium vault covered by a granite capstone, contains 16 porcelain enamel panels that tell the tale of Mount Rushmore’s carving, Borglum, and why the four individuals were chosen to be carved upon the mountain.

The repository is for future men and women who may be curious about Mount Rushmore’s magnificent carving.

7. There’s More to It Than Heads 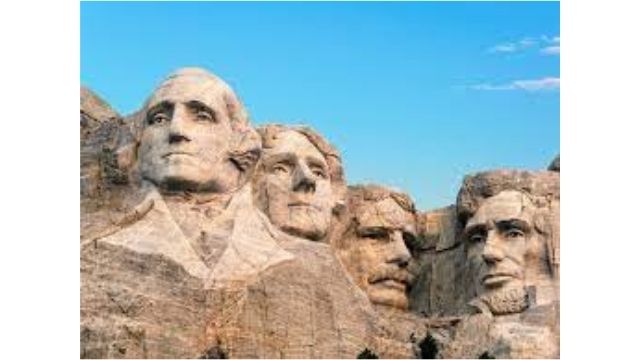 Before beginning work on the sculptures, Borglum created a plaster model of what they will look like as most sculptors do. Borglum had to revise his model nine times during the carving of Mount Rushmore. However, it’s worth noting that Borglum had every intention of carving more than just heads.

Borglum envisioned the statues of the four presidents to be from the waist up, as depicted in this model. Because of a paucity of funds, Congress chose to stop carving on Mount Rushmore once the four faces were completed.

Originally, Thomas Jefferson’s head was supposed to be carved to the left of George Washington’s (as a visitor would be looking at the monument). Carving for Jefferson’s face began in July 1931, but it was quickly discovered that the granite at that location was filled with quartz, making the sculptures unsuitable.

The group blasted away at the quartz-riddled granite for 18 months, only to discover more quartz. Borglum made the difficult choice to change Jefferson’s visage in 1934. The workers demolished the work that had been done to Washington’s left and then began work on Jefferson’s new face to Washington’s right.

9. A Nose That Is Extra-Long

Borglum was not only thinking of the people of today and tomorrow when he built his colossal “Shrine of Democracy” on Mount Rushmore; he was also thinking about people thousands of years in the future.

Borglum designed a monument to democracy that should remain awe-inspiring far into the future by calculating that the granite on Mount Rushmore will degrade at a rate of 1 inch per 10,000 years. But, just to be sure, Borglum added an extra foot to George Washington’s nose to ensure that Mount Rushmore would last. As Borglum put it:

“To a sixty-foot-tall face, what is twelve inches on the nose?”

10. The Sculptor Passed Away Just Months Before the Work Was Completed

In 1925, arguments over who was in charge of Borglum’s prior project at Stone Mountain in Georgia (Borglum or the chairman of the organization) resulted in Borglum being chased out of the state by a sheriff and a posse.

After President Coolidge agreed to attend the Mount Rushmore dedication ceremony, Borglum had a stunt pilot fly him over the Game Lodge where Coolidge and his wife, Grace, were staying so that Borglum could throw a wreath down to her on the morning of the event. While Borglum was successful in courting Coolidge, he offended Coolidge’s successor, President Herbert Hoover, stalling financial progress.

On the job, Borglum, dubbed “the Old Man” by his coworkers, was a tough boss to work for because of his volatile nature. Depending on his mood, he would frequently fire and then rehire workers. Borglum’s secretary lost track of how many times she was dismissed and rehired, although she guesses it was approximately 17 times.

Despite the fact that Borglum’s personality occasionally caused problems, it was a major factor in Mount Rushmore’s success. The project would have never started if it hadn’t been for Borglum’s enthusiasm and dedication.

Borglum died barely seven months before the completion of Mount Rushmore. Lincoln Borglum, his son, completed the project for his father.