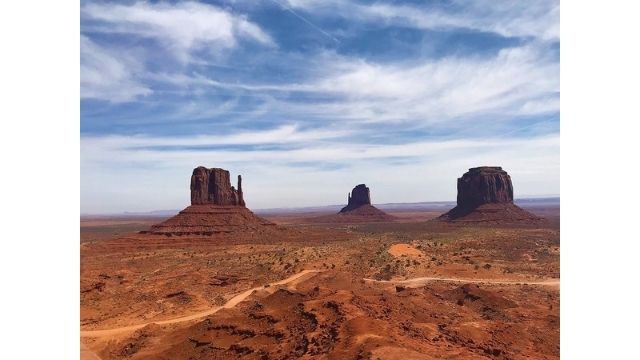 Monument Valley (Navajo: Tsé Bii Ndzisgaii) is a region of the Colorado Plateau marked by a collection of massive sandstone buttes, the biggest of which rises 1,000 feet (300 meters) above the valley floor. It is at the Four Corners area, on the Arizona–Utah state line (about 36°59′N 110°6′W). The valley is located within the Navajo Nation Reservation and may be reached through US Highway 163.

Since the 1930s, Monument Valley has been featured in a variety of media. “Its five square miles [13 square kilometers] have defined what decades of moviegoers think of when they image the American West,” says reviewer Keith Phipps, referring to director John Ford’s usage of the area in a number of his best-known films.

Monument Valley is a large area that straddles the border between Arizona and Utah in the United States. It is characterized by massive rock formations such as mesas, cliffs, and buttes. The Mittens, a pair of buttes with thin “thumb” outcrops, are undoubtedly Monument Valley’s most iconic landscape. 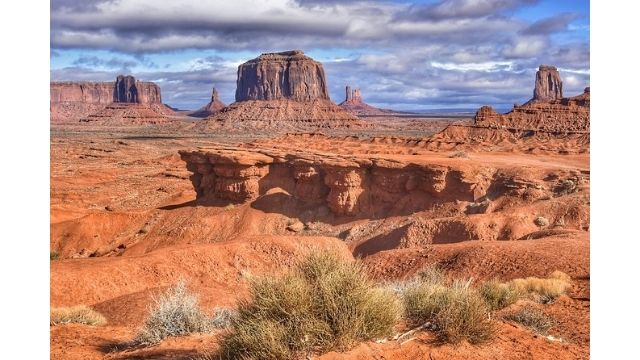 Monument Valley has served as a symbol of the American West in hundreds of films dating back almost a century. The meaning of “the West” has evolved over time.

Stagecoach was the first film to bring Monument Valley to the attention of the American people (1939). The film Stagecoach tells the account of a party of white settlers who were ambushed by Apaches as they traveled between Arizona and New Mexico. In the 1800s, the settlers, including the bandit Ringo Kid, are trying to start fresh lives in the West. John Wayne plays The Ringo Kid, an American actor who became synonymous with Western films and, more often than not, America itself. John Ford, one of the most famous and important directors of all time, directed the film. In Monument Valley, Ford made a total of nine moves.

My Darling Clementine (1946), a retelling of the historic “Gunfight at the O.K. Corral,” was also directed by John Ford. The gunfight between Sheriff Wyatt Earp and a group of unruly cowboys, which took place in real life in 1881, symbolizes the establishment of law and order in the Old West. Wyatt Earp and his comrade, the gunfighter Doc Holliday, became romantic emblems of the West’s settlement thanks in part to My Darling Clementine.

The Searchers (1956), another John Ford picture, is largely regarded as the best Western ever made. In it, an older cowboy, played by John Wayne once again, sets out on a brutal search for his niece, who has been kidnapped by Comanches. Despite the fact that the Comanches (played by white actors) are the antagonists, Native Americans are shown in The Searchers as more sympathetic than in previous depictions (such as Stagecoach). At the conclusion of the film, Wayne walks away alone, symbolizing the end of the “cowboy” lifestyle in the Old West.

Easy Rider (1969) features two characters with well-known names: Wyatt and Billy. They’re named after Wyatt Earp and Billy the Kid, two renowned Old West outlaws. They are, nonetheless, diametrically opposed to their cinematic forefathers. They travel east rather than west. They don’t ride horses; instead, they ride motorcycles. Billy and Wyatt, dubbed “Captain America,” reflect the 1960s American West: youthful, cynical, and wary of authority figures such as John Wayne. To be clearer, Easy Rider’s Wyatt, Peter Fonda, is the son of Henry Fonda’s Wyatt in My Darling Clementine. The next generation of Westerns is Easy Rider.

Forrest Gump, like Wyatt, Billy, and his Western forefathers, rode across Monument Valley in search of new lives and ways to define themselves (1994). After being rejected by his girlfriend, Forrest flees across the United States to Monument Valley. The West represents freedom and escapes in films like Stagecoach and Easy Rider.

Monument Valley has been traversed by stagecoach, horse, motorcycle, and foot in films. Wings are maybe the oddest mode of transportation, yet they are also the most natural. In the film Winged Migration, birds are the main characters (2001). The filmmakers of Winged Migration, unlike the monuments of Monument Valley or the mythical characters that walked through them, are not even linked to Earth, let alone ideas about identity or freedom. A flock of Canada geese soars above the Mittens with the same ease as the Statue of Liberty or the Eiffel Tower.

“The West” had almost lost its meaning in a globalized world by the turn of the twentieth century.

The buttes are well-organized, with three main levels. The Organ Rock Shale is in the bottom, de Chelly Sandstone is in the middle, and the Moenkopi Formation is on top, capped by Shinarump Conglomerate. Large stone buildings dot the valley, including the fabled “Eye of the Sun.”

Between 1945 and 1967, the Monument Upwarp’s southern extent was mined for uranium, which occurs in scattered parts of the Shinarump Conglomerate; in some deposits, uranium is linked with vanadium and copper. 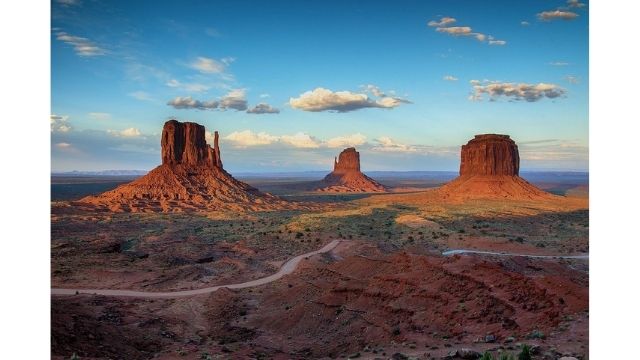 Visitors can pay an entrance charge and drive a 17-mile (27-kilometer) gravel road through the park (a 2-3 hour trip). Only guided tours are available in parts of Monument Valley, such as Mystery Valley and Hunts Mesa.

The climate in Monument Valley is desert, with cold winters and hot summers. While the summers are sweltering, the region’s high altitude tempers the heat. Although the valley has an average of 54 days per year with temperatures exceeding 90 degrees Fahrenheit (32 degrees Celsius), summer highs rarely exceed 100 degrees Fahrenheit (38 degrees Celsius). Summer nights are pleasant, and temperatures drop rapidly after sunset. Winters are bitterly cold, but daytime temperatures are typically above freezing. Temperatures below 0 °F (-18 °C) are uncommon, though not impossible, even in the winter. In the winter, Monument Valley gets a little dusting of snow, but it usually melts within a day or two.