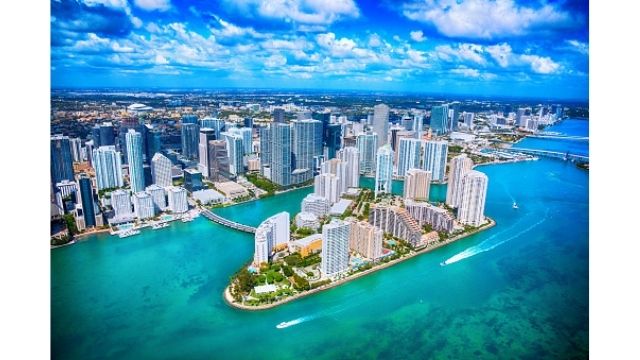 1. Miami is the continental United States’ most southerly significant metropolis.

2. Miami sits on the Atlantic coast, about 2 degrees north of the Tropic of Cancer, and has a warm subtropical marine climate with an average annual temperature of about 75 degrees Fahrenheit (24 degrees Celsius).

3. Miami, along with its environs, is one of the world’s major tourist destinations, thanks to its moderate climate, ocean location, and large resort facilities.

4. Miami, with a land area of 54 square miles (140 square kilometers), is located on Biscayne Bay, an arm of the Atlantic Ocean formed by the islands that make up the Florida Keys’ northern extremities.

5. The Miami River bisects the city and is connected to Lake Okeechobee to the northwest by a canal.

6. The confluence of Flagler Street, which runs east and west, and Miami Avenue, which runs north and south, divides Miami into four sections: northwest, northeast, southwest, and southeast.

7. Miami is the county seat of Miami-Dade, which is part of the Miami metropolitan region, sometimes known as Greater Miami.

8. Greater Miami is made up of 27 separate municipalities as well as significant unorganized areas, some of which are densely inhabited.

10. The luxurious resorts of Miami Beach, Surfside, and Bal Harbour are located on offshore islands east of Miami across Biscayne Bay.

11. Causeways connect these towns, as well as fashionable Key Biscayne to the south, to the mainland.

12. South Beach’s art deco nightlife sector is considered one of the best in the world.

14. Although Greater Miami is overwhelmingly white, a growing proportion of the city’s population is nonwhite, primarily black with a smattering of other races.

15. In the city proper, Latinos of any race account for 70% of the population, while non-Hispanic whites account for 11.9 percent.

17. The United Nations Development Program placed Miami first in the percentage of residents born outside of the country in which it is located in 2004. (59 percent ).

18. In and around Miami, more than a quarter-million people of Cuban descent dwell. This group has grown significantly as a result of an influx of migrants both when Castro took control in Cuba in 1959 and after Castro’s 1980 release of those desiring to flee the country. 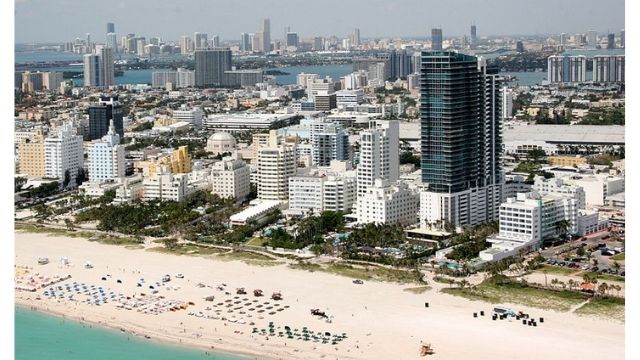 22. Few areas in the world provide such a diverse range of sports, both professional and amateur, as the Miami area. Swimming, water skiing, skin diving, fishing, and boating are among the many aquatic activities available, as are golf (nearly 40 courses), tennis, shuffleboard, bowling, and other sports.

23. Thoroughbred racing (at Hialeah and Calder racetrack, as well as Gulfstream Park in Hallandale, just north of the Miami-Dade county border), dog racing, and jai alai are among the city’s professional sports.

24. Sun Life Stadium is home to the Miami Dolphins of the National Football League, as well as the Florida Marlins of Major League Baseball.

25. The Orange Bowl Classic (formerly played at the Orange Bowl Stadium), a championship intercollegiate football game hosted annually on or near New Year’s Day, and the North-South College All-Star Game are both staged at Sun Life Stadium.

27. The BankAtlantic Center in adjacent Sunrise is home to the Miami-based Florida Panthers professional hockey franchise.

28. Marine Stadium is a viewing venue for powerboat racing in Biscayne Bay, located on the Rickenbacker Causeway leading to Key Biscayne.

29. The Miami-Dade County Auditorium is home to a professional symphony orchestra and ballet group. Visiting performers from the United States and overseas perform in a variety of concert programs.

30. There is also professional theatre, as well as amateur theatrical plays, at the Coconut Grove Playhouse.

31. There are numerous art museums in the Greater Miami area. The Miami-Dade County Art Museum is housed in Villa Vizcaya, an Italian Renaissance-style villa erected by businessman James Deering.

32. The Lowe Art Museum on the University of Miami’s Coral Gables campus houses paintings from the Kress Collection. In addition, the Bass Museum is located in Miami Beach.

33. The Historical Museum of Southern Florida, the Holbrook Antique Arms and Gun Museum, and the Museum of Science, which includes a planetarium, are among the specialized museums.

34. There are various natural attractions in Miami. The Everglades National Park, as well as Grossman Hammock State Park in Homestead, provide a unique opportunity to view the flora and fauna of an undisturbed environment.

35. The Crandon Park Zoo on Key Biscayne; Monkey Jungle and Parrot Jungle, both south of Coral Gables; and the Seaquarium, featuring marine exhibitions, on Rickenbacker Causeway are among the organised animal refuges.

36. The Miami Beach Garden Center and Conservatory, Orchid Jungle and the Redland Fruit and Spice Park near Homestead, and the Fairchild Tropical Gardens in south Coral Gables all exhibit tropical plants and flowers.

37. There are numerous public parks across the city, each with a diverse array of trees and flowers. Camping and numerous sporting activities are available at several of these locations.

38. Tourists account for more than 60% of the economic activity in the Miami area, with over 10 million visiting each year.

40. Various other industries, including construction and wholesale and retail suppliers, rely heavily on the tourism trade, either directly or indirectly.

42. Many global firms have their Latin American operations headquartered in Miami. 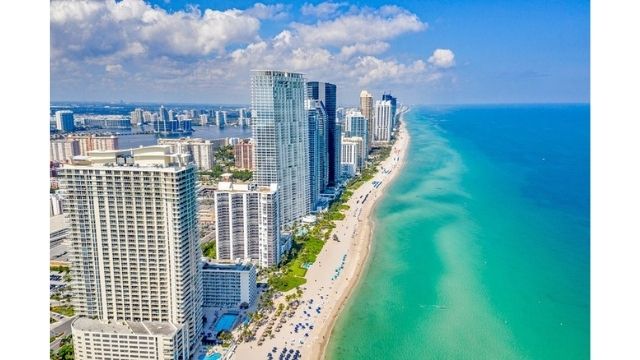 43. In the United States, Downtown Miami has the highest concentration of international banks.

44. Greater Miami has a lot of light manufacturing, especially in the textile business, but it also has a lot of stone quarrying and warehousing.

45. Tomatoes, avocados, mangoes, and beans are all grown in the city’s agricultural zone.

46. Despite being south of Florida’s big citrus belt, Miami-Dade County has a large lime crop.

47. Miami is an important transportation hub. There are several airports in the area, the most notable of which is Miami International Airport, which is located on the city’s western outskirts and offers flights to Latin America and Europe, as well as domestic destinations.

48. Direct passenger rail service is offered between the Northeast and Midwest of the United States. The city is also served by interstate bus lines, as it is connected to the Florida turnpike and the interstate highway system.

49. Miami, which is located on the Atlantic Intracoastal Waterway, is a major freight and cruise ship port.

50. In 1960, the Dade County Seaport Commission began and completed the long-term development of a deepwater marine terminal in Biscayne Bay, which was controlled by the Port of Miami. It is the world’s largest cruise ship port and one of the busiest freight ports in the United States.