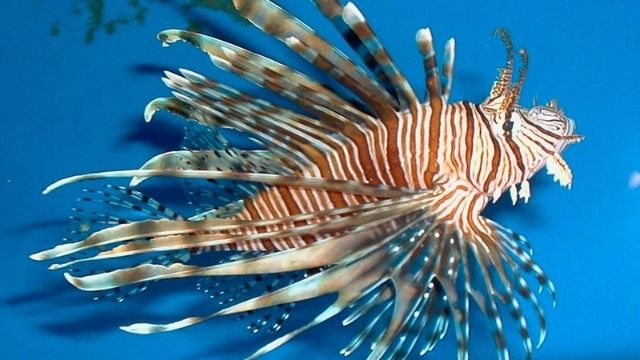 We’re on a quest to become the most thorough source of information for the general public in order to properly comprehend that the lionfish invasion is a plague, unlike anything we’ve ever seen before in human history. We made every effort to deliver the following list of lionfish facts with as little commentary or fluff as possible. Please use our Contact Page or leave a comment below the page to alert us to any corrections, updates, or additions you believe should be made regarding lionfish facts. We have also provided numerous other links to collections of additional information at the conclusion of this list.

The most likely source of the invasion in the Western Atlantic Basin is purposeful and unintentional releases from home aquariums, while lionfish migrating through the Suez Canal is the most likely cause of their establishment in the Mediterranean Sea.

It is quite doubtful that either population will ever be eradicated from the invaded territories. They’re here to stay, and we’ll have to work together to regulate their numbers until nature finds a way to restore equilibrium.

The word “feathered” or “winged” comes from the Ancient Greek word “Pterois.” The genus Lionfish has ten species. 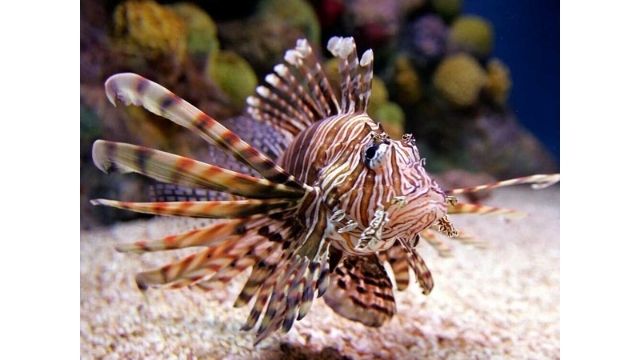 Invasive P. volitans and P. miles grow to be between 13 and 16 inches (33 and 40 cm) long as adults. The white, dark red, brown, and black stripes on the red lionfish and devil firefish are nearly always present, with dark spots on the orange fin rays and caudal fin (tail). It’s fairly uncommon for these fish to turn almost completely black.

In around two years, lionfish mature into adults.

The world’s largest lionfish were caught near Islamorada, Florida, and measured a little more than 47.7cm (19.5 inches).

Using water temperature as the limiting element of its probable non-native range, lionfish may conceivably dwell as far north as Rhode Island, USA (where sightings have been confirmed) and as far south as Buenos Aires, Argentina during the summer months (no known sightings yet).

Visual sightings of lionfish have been made down to depths of 1000 feet (305 meters).

Another fascinating lionfish fact is that they have no known predators outside of their native habitat, though there have been accounts of healthy, uninjured lionfish being eaten in the Caribbean Sea by grouper, grey triggerfish, and huge eels.

Cornetfish, grouper, giant eels, Bobbit worms, frogfish, other scorpionfish, sharks, and other predators have been observed hunting lionfish in their natural habitat.

When female lionfish reach 7 to 8 inches in length, or around one year old, they are sexually mature and will lay eggs.

In South Florida and warmer Caribbean seas, a female lionfish can release between 10,000 and 30,000 unfertilized eggs every four days, totaling around 2 MILLION eggs every year, while in colder waters, she may only spawn 3 to 4 months per year. Every spawn, she will usually release two egg sacs that are between 1 and 2 inches long.

According to reports, the egg sac contains a chemical repellent that keeps other fish away from the eggs.

A lionfish will not normally go far from its habitat once its territory has been established.

The stomach of a lionfish can enlarge up to 30 times its normal size.

Lionfish prefer to hunt in the early morning and late evening. They’ve also been described as energetic hunters when the light is weak, such as on gloomy or particularly cloudy days.

Read more: 20 Interesting Penguin Facts for Kids You Should Know!

Erin Cziraki took this photo while studying for her master’s degree at Coastal Carolina University in Conway, South Carolina. Facts about Lionfish As long as the lionfish can get its jaws around the prey, it can eat prey that is slightly over half its own body size.

Lionfish are known to eat nearly every marine species within their range, which includes over 70 different fish, crustaceans, and mollusks, according to some estimates. (As far as we know, they haven’t eaten any immature sea turtles.)

In just 5 weeks, a single little lionfish can reduce the population of juvenile native fish on any particular reef by about 79 percent.

One lionfish was recently discovered with over 60 prey in its stomach, which is an interesting lionfish fact.

According to controlled research, a lionfish may go up to 3 months or more without eating and only lose 10% of its body mass.

The venom is a protein-based mixture of a neuromuscular toxin and acetylcholine, a neurotransmitter. Heat or freezing can be used to denature (or render inactive) the venom.

For lionfish stings and envenomation, the recommended first aid is to surface safely from a dive, remove any broken spines, disinfect the wound, and then administer non-scalding hot water for 30 to 90 minutes. Keep an eye out for signs of an allergic response or shock, and take appropriate action. Seek medical help as soon as possible.

No human deaths have been reported as a result of lionfish envenomation.

Lionfish are not harmful, therefore you can eat them.

Ciguatoxins, the cause of Ciguatera Food Poisoning (CFP), have been detected in a tiny sample of lionfish in VERY SPECIFIC AREAS where other reef predators are known to carry the risk of ciguatera, but no cases of ciguatera food poisoning have been reported to far.