The 12 Most Dangerous Facts About King Cobras 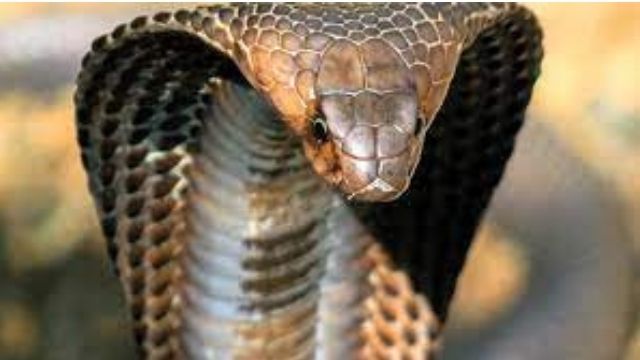 The king cobra is one of the most feared and revered snakes on the planet, known for its intimidating size and lethal bite. It also has a distinctive voice, unusual nesting habits, and a name that conceals its true nature.

1. The King Cobra Is the World’s Longest Venomous Snake.

This South and Southeast Asian native typically grows to be between 10 and 13 feet long, although the largest ever recorded was a specimen from modern-day Malaysia kept at the London Zoo in the mid-twentieth century. The beast was 18 feet, 9 inches long from head to tail.

King cobras, despite their common name, are not real cobras, which belong to the genus Naja. The king cobra is the only member of the Ophiophagus genus; genetic research suggests that these large snakes are more closely linked to sub-Saharan African mambas than to real cobras.

There are several physical characteristics that distinguish king cobras from real cobras: The hoods of king cobras are proportionally narrower than those of the Naja species; the head of the Ophiophagus is greater than its body size; and king cobras feature a pair of matching, elongated occipital scales at the base of the neck, which are lacking in Naja cobras.

When threatened, king cobras expand their hoods and elevate their heads as high as 6 feet off the ground to appear larger. However, those aren’t their only menacing weapons: they also employ sound to intimidate.

Threatened kings take a deep inhale and then quickly exhale, forcing a blast of air through the tracheal diverticula in their respiratory tract, which works as a resonating chamber, producing a sound like “a furious German shepherd’s snarl,” according to one scientist. It’s a lot scarier than your average hiss.

4. The Nervous System Is Attacked by Its Venom.

The venom of the king cobra is less potent than that of other smaller snakes, such as the inland taipan of Australia. When it comes to dangerous compounds, however, quantity can be more important than quality: A king cobra may inject as much as 7 milliliters of poison into its victim with a single bite—nearly enough to fill 1.5 teaspoons.

The effects of various venoms on the human body vary. Many vipers, for example, have venom that targets the circulatory system of the victim and destroys red blood cells as it spreads. The venom of a king cobra, on the other hand, blocks nerve cell communication, resulting in acute dizziness, distorted vision, and, in some cases, paralysis.

A human bitten victim can die in 30 minutes if the proper antivenom is not delivered soon. Their venom is so potent that it can kill a 12,000-pound elephant in just three hours with a single bite.

5. They Predominantly Consume Other Snakes.

True cobras eat a wide variety of prey, including lizards, birds, rodents, and fish. The king cobra, on the other hand, nearly exclusively eats other serpents, as evidenced by its genus name, Ophiophagus, which means “snake-eater.”

They eat both harmless and deadly rat snakes, as well as venomous kraits, genuine cobras, and other kingsnakes. Even pythons aren’t safe (although king cobras don’t seem to be able to swallow constrictors longer than 10 feet). Eggs and the occasional monitor lizard are also eaten by king cobras.

During the breeding season, male king cobras, like many other animals, compete for females. The snakes begin by assessing each other by extending their heads as high as 4 feet off the ground.

They then engage in a wrestling match. The snakes try to pin each other to the ground with their bodies entangled. (These snakes are largely immune to their own venom, so there’s no biting.) When one of the contestants is eventually pinned, he exits the room.

7. The King Cobra Genome Was Sequenced by Scientists.

The Ophiophagus genome was sequenced by a multinational research team in 2013, revealing that the animal’s venom glands can be traced back to the pancreas system.

The researchers also came to the conclusion that the snake’s lethal venom evolved overage of “arms races” with prey: Cobra venom developed to become more and more harmful over time as these would-be victims were increasingly immune to the snake’s chemical cocktail (which is why, despite the fact that the snakes don’t eat elephants, their venom is potent enough to kill one).

“Our findings… provide a unique view of the origin and evolution of snake venom,” the researchers noted in the publication.

8. King Cobras Are Active Most of the Time During the Day. 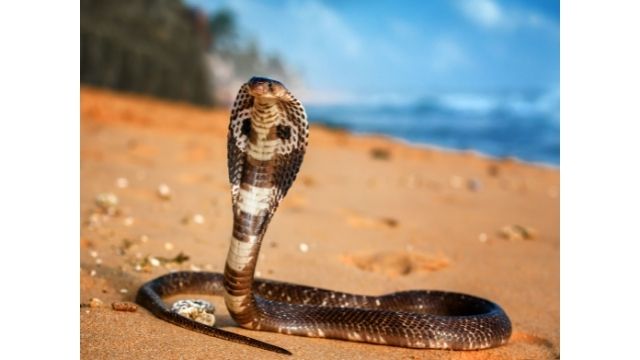 While many real cobras are crepuscular, king cobras are diurnal, meaning they spend the majority of their time active during the day. They seek cover under logs, buttress roots, or termite mounds after nightfall.

9. This Is the World’s Only Snake Species That Builds Nests.

Snakes aren’t exactly model parents by human standards: 70% of snake species lay eggs, generally in a suitable hole or fissure, and many will abandon their brood right away. The king cobra, however, is an exception. The reptile constructs a home for itself. The female begins by gathering leaves with her coils acting as a makeshift rake.

She grabs extra leaves and layers them over her nest after laying 20 to 30 eggs in the middle (the decomposition of the leaves helps keep the eggs warm). The entire procedure can take up to four days, after which the female curls up on top of the nest for the next two or three months as the eggs hatch.

Females don’t feed for the entire time they’re defending the nest and are especially violent, lashing out at anyone that gets too close—but they take off shortly before the eggs hatch.

10. Banding Is Applied to Babies and Some Adults.

Baby king cobras are about a foot long at birth and have more bright colors than adults, with alternating black and whitish-yellow stripes along the length of their bodies.

Most snakes lose their bands as they grow older; when fully matured, king cobras are almost entirely brown or olive in color (though the snakes do have faded yellow bellies). However, not every snake becomes solid: Adult kings in Myanmar are frequently banded.

11. These Snakes Have Been Known to Live for Over 20 Years.

The average longevity of a king cobra in captivity is 17.1 years, with a maximum age of 22 years.

While kings spend most of their time hunting on the ground, they frequently hang out in trees and will stalk their prey well above the forest floor.

One person using a tracking device chased a pit viper up into the canopy of a south Indian forest, going more than 65 feet above the ground in the process. While king cobras are not considered semiaquatic snakes, they have been seen to swim for short distances.